Sally has been playing around with the Cascade 220 Sport.  We've discussed this yarn before, and Sally is pretty smitten with it.  Before she left for a well-deserved spring break trip, she grabbed five skeins of different colors and decided it was time to hone her stranded knitting skills. 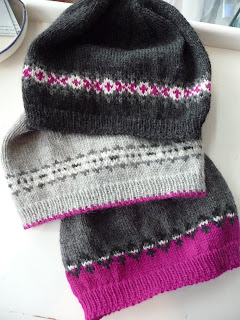 Stranded knitting is the general term for the technique in which two colors are worked in a row to create a pattern, with one strand carried behind the work while the other is being knitted.  Multiple colors are usually used in a given project, but two colors per row is standard.  While the terms stranded and Fair Isle are generally used interchangeably at this point, Fair Isle knitting is actually a subset of stranded knitting focusing on the traditional patterns of Fair Isle, one of Scotland's remote Shetland Islands.  Technically, you are only doing Fair Isle knitting if your stranded colorwork pattern is one of their traditional motifs.

Colorwork is an even more general term for multi-color knitting, including stranded knitting, mosaic knitting, intarsia, duplicate stitching, and even basic stripes.

We have several pattern dictionaries for stranded knitting patterns, including Alice Starmore's Charts for Color Knitting, Alice Starmore's Book of Fair Isle Knitting, and 200 Fair Isle Motifs, which we are restocking as soon as we can.  Sally pulled out a few basic motifs and used them to create her beautiful hats.  Her plan is to create 5 hats from 5 skeins of 220 Sport, which are $5 each.  Five for five for five!  Granted, the book is an added expense, but if you love stranded knitting, it's a good investment.

To keep the technique manageable, Sally used just a little bit of colorwork on each hat.  If you are feeling more ambitious, I highly recommend We Call them Pirates, a free pattern from Hello Yarn.

I have made this hat in the original skull and crossbones pattern a few times, and I have also used her blank hat template to create several of my own designs. 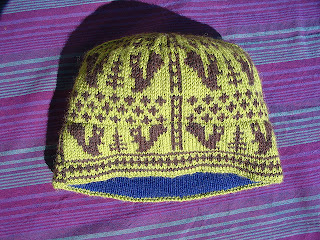 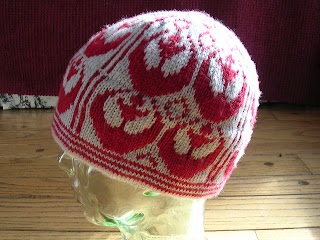 I love doing colorwork like this, especially on little projects like hats and mittens.  I find it hard to put the knitting down, because I want to knit "just one more row" to see the pattern develop.

We actually unpacked 20 colors of Cascade 220 Sport today, so if you come in this weekend you will really have your pick of the litter.  Come find your favorite five colors, and stay tuned for the pattern for Sally's sweet little hats!

Also, don't forget to send us photos of your mom for our window display.  If you are a mother, please send us a photo of yourself!
Posted by Leah at 4:01 PM